For more than 50 years, Varroa has been raging apiaries around the world. In the past decades, all kinds of methods have 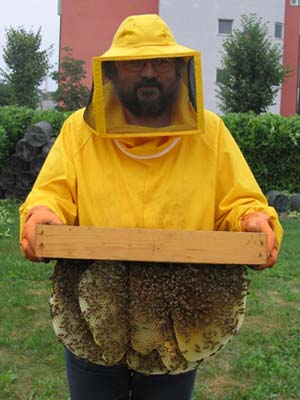 For more than 50 years, Varroa has been raging apiaries around the world. In the past decades, all kinds of methods have been tried to keep it under control, but we must admit that so far no final solution has been found. Most of the efforts have been devoted in the vain to find an effective, cheap, easy to use and with no side-effects acaricide. However, research also focused on Varro-resistant bees and the development of biomechanical methods.

Since the 1970’s, it was noticed that bees enjoy and endure the heat better than Varroa (both the optimal temperature and the maximum bearable temperature are lower for Varroa than for bees). Using heat as a physical means of fighting Varroa was explored. The first attempts focused on treating adult bees to free them from phoretic Varroa. Subsequently, devices were developed to treat the brood honeycombs after brushing out the bees, with the objective of killing Varroa in its reproductive phase (when it is almost completely immune from acaricidal treatments). Both approaches are somewhat cumbersome and generated limited results. The ideal solution would obviously be to heat the hives as they are, with no need for preventive manipulations, so as to act simultaneously on Varroa mites both in their phoretic and reproductive phases.

In recent years, an Italian company (Bee EthicTM) has devised and developed a thermotherapy system that is based on the use of plastic wax sheets coated with natural wax, in which an electrical resistance is inserted. Bees are able to build these wax sheets without problems and families develop smoothly on these honeycombs, which are heated by the electric resistance, supplied by the appositely modified holders and frames. In order to apply thermotherapy, an electricity source is needed (generator, photovoltaic panel, connection to the grid). The system includes a set of power cables and a temperature regulation system capable of maintaining a sufficient temperature in the hives to kill the Varroa without damaging the adult bees and the brood. The Bee EthicTM  system obviously provides all elements needed to perform thermotherapy in total safety also in isolated apiaries.

The system was fine-tuned following many years of experience of the creators and beekeepers who already use the system, and tests carried out by the Universities of Perugia and Turin. Each hive, equipped with heatable honeycombs (beside the two external ones), must be treated for 90 minutes, with an initial heating-up phase to bring the temperature of the brood to 42° C and then keep it constant for the duration of the treatment. In this way all infant forms and about half of the adults  Varroa are killed with no significant  harm to adult bees and the brood. The treatment must be repeated every 3-4 weeks to prevent the increase in number of Varroa inside the hives and face any re-infestations from apiaries close to those treated. By operating with this methodology, it is possible to avoid the use of any chemical and/or bio-mechanical intervention for the entire spring-summer period, allowing bee-keepers to take full advantage of the late-season honey production and to produce honey and other bee products without any residues. In Autumn, the lowering of the air temperature, the more frequent re-infestations and the abundant stocks of honey in the honeycombs (which increase the hive’s thermal inertia), can make thermotherapy less effective. In this period, it is therefore necessary that bee-keepers verify the degree of infestation of their hives by applying the usual methods of combating Varroa, if needed.

With the recent developments in thermotherapy, Italy is now at the forefront in the fight against Varroa by making available to bee-keepers an alternative method to those adopted so far to counter the disasters caused by the spread of this mite on the planet.